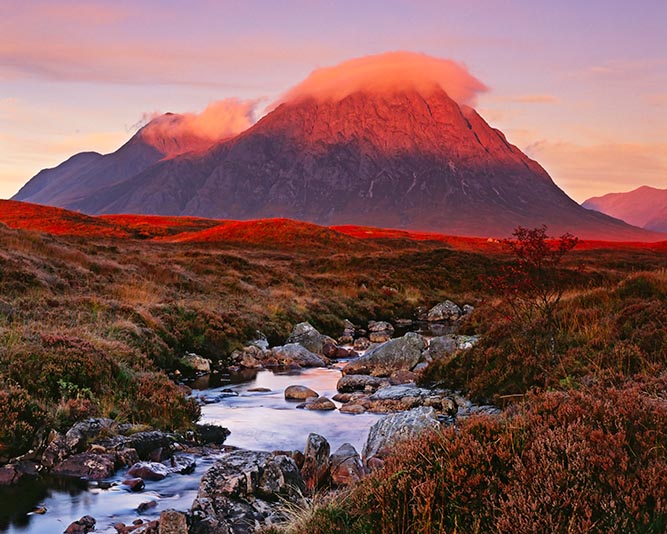 Forming the backdrop to movies such as the Braveheart and Highlander, the distinctive pyramid shape Stob Dearg, the main peak of Buachaille Etive Mòr, is arguably the most recognisable of Scotland’s mountains. Buachaille Etive Mòr translates as the ‘great shepherd of the Etive’, the Etive being the river that winds its way around the base of the Stob Dearg.

This image was created on the second of two trips I’d made to the Highlands in the space of a month. On both occasions I was attending workshops led by professional landscape photographers. The trips were an excellent opportunity to learn more about photography and the Scottish Highlands, an area of the country I wasn’t then familiar with. Unfortunately on the first workshop, low cloud and rain had obscured the mountain and although I shot a few rolls of black and white film, the conditions were not ideal for colour work. Therefore there was a sense of anticipation on the second visit to Buachaille that I was being allowed another bite of the cherry….

Buachaille is at its majestic best in early morning light so there was no choice but to rise in the cold, dark of a winter’s morning and make the short journey to the mountain from the hotel.

There are many suitable viewpoints along the river and many images to be found. I chose a composition where the river would lead the eye to Buachaille and at an angle where the river would also reflect the colour of the sky as the sun rose. I use a medium format camera and selected a 105mm lens which is approximately equivalent to a standard 50mm lens in 35mm systems. Using this lens meant that Buachaille was more dominant in the image and the perspective more ‘true’ than if I’d used a wider angle lens such as my trusty 55mm.

As the sun rose I knew from experience that the contrast level would be high between the sunlit area of the mountain and the darker shadows of the banks of the Etive. To avoid the lower half of the image turning into an unappealing slab of solid black, I took a spot meter reading from the sunlit area of Buachaille and also from the river bank, did a few calculations on frozen fingers and selected a two stop hard graduate filter. Using this filter would help to balance the exposure between the two halves of the image. I carefully aligned the edge of the graduated area along the diagonal that runs horizontally across the image to avoid an obvious ‘join.’

The light was far betting than I’d hoped. Although I shot many frames of film, I occasionally tried to step back from my photography and take the time to marvel at this perfect scene that I was privileged to be part of.

Then all that remained was to pack up my gear, walk to the car for the drive back to the hotel and a well deserved cooked breakfast. 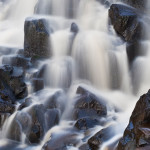 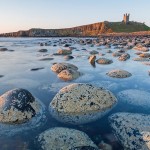