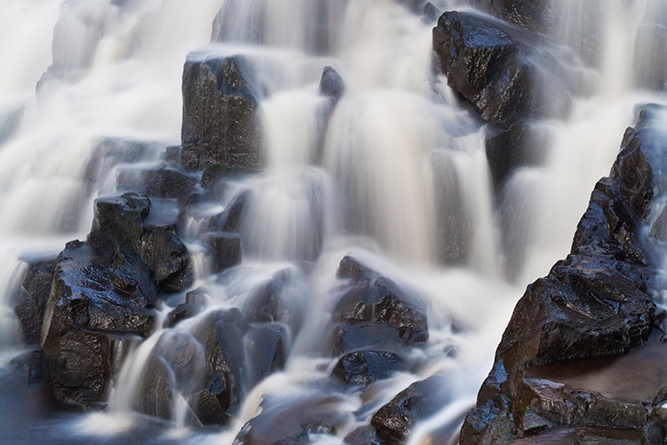 You can feel it in the soles of your boots before you see it. You know that something mighty is happening, just out of sight, just below you. An elemental force, wild and untameable. And then you are there. Standing open-mouthed. Looking down at… Cauldron Snout.

Well, okay perhaps the name doesn’t quite do it justice, but this is a mighty waterfall indeed. It’s on the River Tees in County Durham. At 200ft it is England’s longest and it tumbles headlong through an outcrop of the Whin Sill formation.

Now, the words Whin Sill may not mean much to most people. But, if you’re a geologist those two syllables will cause a flutter of excitement. The Whin Sill is a layer of igneous rock, dolerite to be exact, formed during the Carboniferous period. It stretches from County Durham across the North East to the Northumberland coast. And it’s a hard and dense rock. So tough that chips of it are used to cover roads all over the country. Cauldron Snout? It’s taken a few millennia but it’s carved a gouge right through the Whin Sill as though it were butter.

So, you’re probably thinking, the journey to reach this wonder of nature must be as epic as the landscape. And you’d be…wrong. It’s not too far from a handy car park and it’s on the route of the Pennine Way so there’s a very good path right to the water’s edge.

That said, on a wintry afternoon with the wind whistling around your tripod and the threat of snow hanging in the air, you do feel like a hardy pioneer. Though in my case, a hardy pioneer who wasn’t too keen to be standing on the edge of icy rock, looking down into a ravine of raging water.

Call me a wimp if you like, but I was quite happy to compose my shot well away from the edge. I was quite taken by a line of golden grass that had found a crack in the Whin Sill to grow through. It added colour to the bleak landscape of the area, and was a pleasingly organic counterpoint to the angular geometry of the rock.

My 17-40mm lens is perfect for this sort of photography. At the wide end of the range, the angle of view is sufficient to include detail in the foreground as well as helping to convey the openness of the surrounding landscape. With this lens I like to get down low. Setting the tripod up I splayed the legs so that the camera would be as close to the ground as possible. That also meant I didn’t have to look over the drop in front of me, which was a bonus.

I had my foreground interest now. The sky, though, was a bit dull. It had the colour and texture of an old duvet. A 2-stop graduate filter was enough to stop the clouds over-exposing, but I decided not to include too much sky in the final image. Because I wanted the depth-of-field to extend from the grass in front of me to the hills across on the other side of Cauldron Snout, I needed to use f/16. In the fading light of the afternoon this meant a shutter speed of 1/5 sec. But that was okay. Despite the cold, I didn’t mind waiting. 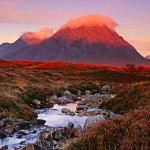