Moving on from Craster the next landmark of note is the jagged ruin of Dunstanburgh Castle, standing on a spur of land that juts out into the North Sea. The castle was built in response to a military threat from Scotland, a theme that will become familiar as the border draws nearer. Even before Edward II lost power over Scotland in a fierce battle near Bannockburn in 1314, fear of a counter-invasion had rippled through Northumberland. In response to this threat, Earl Thomas of Lancaster began construction of Dunstanburgh Castle to defend his northern territory.

During the Wars of the Roses, heavy damage was done to Dunstanburgh, and this damage was never repaired. By 1538 a report noted that Dunstanburgh was a ‘very reuynus howsse and of smalle strength’. Ruined it may be, but Dunstanburgh Castle is still an imposing site, particularly when seen from the gentle curve of Embleton Bay to the north. This long stretch of golden sand is a popular destination for holidaymakers in the summer, and for the multitude of wading birds who migrate here for the winter.

Ruined it may be, but Dunstanburgh Castle is still an imposing site

Seahouses is the closest that the Northumberland coast gets to the giddy delights of Blackpool. Unabashedly a tourist trap, the main street through the village is a cheerful mix of fish and chip restaurants, amusement arcades and novelty gift shops. These hedonistic distractions have now replaced fishing as the prime commercial activity of Seahouses. The harbour is still busy, though not with working trawlers. Nowadays, boats take visitors to the nearby wildlife haven of the Farne Islands, famed for their seal population, and for breeding colonies of puffins, terns and other sea birds.

In better repair than Dunstanburgh is Bamburgh Castle, which sits on an extrusion of volcanic rock known as the Whin Sill formation and dominates the skyline of the eponymous village in its shelter. The oldest extant part of the castle was probably built in the reign of Henry II. During the Wars of the Roses the castle suffered extensive damage due to cannon fire. It then remained in a state of disrepair until acquisition in 1894 by the industrialist, Lord Armstrong. An ambitious programme of modernisation and reconstruction restored the castle to the standards of a family home, which is occupied by Armstrong’s descendants to this day.

During the middle ages, Berwick was piggy-in-the-middle, belonging either to England or Scotland

After the wildlife refuge of Budle Bay and the long stretch of Goswick Sands, the final stop on this journey along the Northumberland coast is the town of Berwick-upon-Tweed. The most striking aspect of Berwick is the wall that separates the old heart of the town from modern housing estates and caravan parks without. During the middle ages, Berwick was piggy-in-the-middle, belonging either to England or Scotland as power ebbed and flowed in the border region. It wasn’t until 1482 that Berwick finally and decisively became an English possession. The fine town walls date from the 16th century, when trouble with Scotland and her ally France threatened the English hold on Berwick. Despite construction costs of £128,648 – an incredible sum of money in Elizabethan England – the walls were never needed, since the 1707 Acts of the Union ended the threat of a Scottish military takeover of Berwick forever.

Other, more recent, threats of invasion have come and gone. The whole of the Northumberland coast is still dotted with concrete pillboxes and tank traps, testement to the very real danger of invasion during the second World War. But today peace reigns, and visitors arrive not for conquest but to enjoy the many splendours this outstanding area of unspoiled coast has to offer. 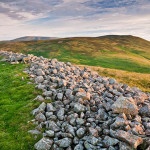